Hi there! If you visit my website on a more regular basis you have probably noticed some changes. I have tried to tidy up the design a bit.. You also might have noticed that my shop is gone. Physical CD’s are no longer for sale at this point, and next releases probably will be digital only. A new shop with merchandise and goodies is in development.

I tried to come up with a new project-name for my future releases. I have chosen the name NeoSpace because it pretty much says what it is. I want to break free from predefined Spacesynth styles and produce a new and appealing sound for old and new generation space sound lovers. Of course I will be using old gear to produce my music, and maintain the old analog sound. Occasionally I already used the name on compilation albums.

New video’s are coming up soon. I was working on a cover for Youtube but it has been delayed, because I want to explore the possibilities to actually release it first. Making video’s for Youtube is very time consuming (if done right) but as soon as I find some time I will upload some new stuff. So if you didn’t do it already subscribe to my channel and be the first to know.

I have been working on some tracks for a new retro spacesynth project by Spacesound Records, in cooperation with Eric van Vliet and some other producers. There is no release date yet… but I am sure it will be a very interesting project 😉

See you in space!

It has almost been 4 months since my last post, so it’s time for an update.

For those of you who visited my Soundcloud profile lately, you might have wondered where all my tracks have gone. Well I decided to give up on Soundcloud because the amount of people following me there is not as big as I had hoped for. Also there is not a lot of interaction possible in the Soundcloud app, so basically I don’t think it is fun anymore.

Having that said.. I want my Youtube channel to be more successful, so I decided to upload more video’s on a regular basis. Not only covers, but my own music as well. I know CD Baby does upload my music to Youtube Music, but this is only available in USA region and not in Europe for some reason. My fanbase on Youtube is growing and I get a lot of nice responses there.

So if you want to be the first to know about new video’s, subscribe and turn on notifications on my channel 🙂

New projects
So, after summer it’s time to get into the studio again. I am working on some new music for a project with I am not allowed to tell much about. But it will be a nice remake of some iconic 80’s Spacesynth music. Especially for this project I bought a Casio FZ-1 sampler to be able to mimic the sound they used. 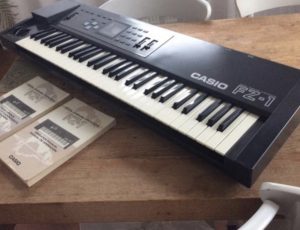 Also this year I will participate in the annual Space Holidays and Space Odyssey compilations, in fact I have some tracks already finished.