Get it now at http://store.cdbaby.com/cd/chrisvanburen7

Also available on iTunes, Spotify, Deezer, Amazon, Yandex and all other digital distributors!

Get your hardware copy (physical CDr) at:
https://www.discogs.com/Chris-van-Buren-Tierra-Del-Fuego/release/12138312 or
https://www.chrisvanburen.com/shop/
(Paypal only)

Thanks to all my fans for your support!

Chris van Buren – Cosmified, as presented on Space Odyssey – Trip 3 by Spacesynth.ru. This is a special thanks to all our fans worldwide! Thanks for your support! Download your free copy, or order a CD at Spacesynth.ru!

Chris van Buren – Future Forecast as presented on Space Holidays 9 by Spacesound Records. This is our annual gift to our fans, thanks for your support! Download your free copy at http://www.spacesoundrecords.com/spaceholidays9.html

Chris van Buren – Drifting into Hyperspace as presented on Space Holidays 9 by Spacesound Records. This is our annual gift to our fans, thanks for your support! Download your free copy at Spacesoundrecords.com !

The guys from Radio Stad Den Haag asked me if they could play my new track ‘Skycharger’ as their RSDH Spacesynth at 21:30h… Of course!
Thanks Menno, Gwen, Michiel and Mark for your support!

This track is taken from the album New Horizons – 2017
https://store.cdbaby.com/cd/chrisvanburen5 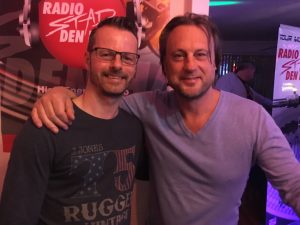 This is my attempt to recreate this epic Laserdance classic as close to the original as possible with my gear and equipment. I used Logic Pro X, Roland Juno 106, Roland D50, Yamaha AN1x and Linndrum and ESQ Wavebell samples in Logic. For this cover I also used a tape saturation plugin in Logic to get that 80’s sound and I even mixed in some vinyl static noise for your pleasure! I hope you like it as much as I did making it.